St Wulfstan became Bishop of Worcester in 1062, just before the Norman conquest. He was the only English Bishop to keep his job after the conquest. (Most of the Bishoprics went to William’s Norman friends or relatives)

Wulfstan campaigned vigorously against the slave trade based in the city of Bristol. At that time, people who could not pay their debts were sold into slavery in Ireland. (A few hundred years earlier, St Patrick, a Briton, had been sold as a slave in Ireland, but that’s another story).

As a result of Wulfstan’s impassioned sermons against the trade, many slaves were released. During his time as Bishop, Wulfstan cared for the poor, and struggled to alleviate the harsh decrees of the Normans upon the vanquished English. 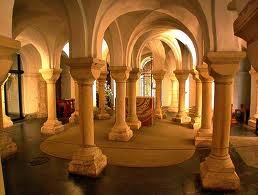 Wulfstan was a great church builder and laid the foundations for Worcester Cathedral. The crypt that he built is still in use, and it is worth a visit to admire the stark Norman architecture.

Wulfstan died in 1095 while engaged in the daily ritual of washing the feet of a dozen poor men. He was canonized in 1203 by Pope Innocent III.

King John has a bad reputation but must have had some good points as he was a great supporter of Worcester Cathedral and had a devotion to St Wulfstan. He asked to be buried at Worcester, and to this day still lies at the foot of the high altar..

The English language evolves at an incredible rate, gobbling up words from other languages, and inventing new ones. Well here is one I hadn’t heard of before until yesterday – Zythophile.

It’s pronounced zee-tho-fyle. What does it mean? It means ‘a lover of beer’. It’s a word that is derived from the greek and thus its etymology should be perfectly acceptable to philologists.

So what is this to do with our hero Thomas Fowell Buxton? Well TFB was a zythophile, at least he made his living out of beer. In 1808 he joined the brewing firm of Truman and Hanbury in Brick Lane, Spitalfields and later became a partner. 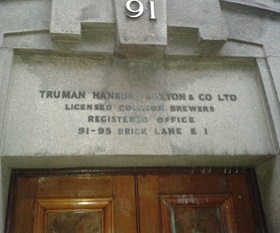 The brewery closed in the late 1980’s but the buildings still remain and the the lintel over the old brewery offices at 91 Brick Lane, still carries the names of the partners ‘Truman, Hanbury and Buxton’.

Martyn Cornell, who runs a blog called ‘Zythophile’ has written a well researched post on the history of the Black Eagle Brewery of Truman, Hanbury and Buxton. You can find this by clicking this link

The brewery itself has long been sold and redeveloped into a home to bars, cafes, clothes shops, art galleries. A weekend food hall in the old boiler house has take-away food from an amazing spread of countries, There are markets on Saturdays and Sundays and exhibition halls, shows and festivals..

Recently, enthusiasts have worked to take up brewing again in the tradition of Truman, Hanbury and Buxton. The new brewery is being set up in Spring 2013 at Stour Road, Hackney Wick. The Black Eagle flies again!

Closer to home in Weymouth, we have long mused about whether a local brewery could be persuaded to create a beer in honour of Thomas Fowell Buxton. Alternatively, perhaps the Black Eagle Brewery can be persuaded to produce a commemorative beer. On the happy day when we dedicate the new monument, we could toast his memory in beer rather than champagne!,

This is a space where admirers of the work of Sir Thomas Fowell Buxton can exchange views, and post news items. This will include Buxton memorabilia, hence the name of this blog “Buxtonabilia”

Who was Sir Thomas Fowell Buxton and why are we so interested in him?

Buxton was a philanthropist and Parliamentarian and was MP for Weymouth, Dorset between 1818 a 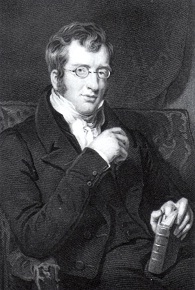 nd 1837. During his time in Parliament he achieved many changes for the common good. but his most memorable achievement was the Act of Parliament of 1833 to abolish slavery in the British Empire.

William Wilberforce’s Act of 1807, abolished the Slave Trade, but people were still enslaved on the plantations. Their children were not their own, and they or their children could be sold on. It was necessary to finish the task.

.In 1833 after a long campaign in which he was subjected to virulence, lampooning and attempts at character assassination, he succeeded in having Parliament pass an Act for the liberation of slaves. All slaves became free from midnight on 1st August 1834. On that day, 800,000 slaves ceased to be property, bought and sold at market like cattle, subject to arbitrary and often very cruel punishments, and with no standing in law. They became citizens, able to own property, maintain their marriages and families and their children became their own.

In spite of many people’s fears, the liberation passed off peacefully. There was no revenge, and neither did the erstwhile owners misbehave. Buxton and his colleagues had achieved the liberation by parliamentary process – something that could only be achieved in the USA by a great civil war.

Buxton inherited Belfield House, Wyke Regis, Weymouth from his grandmother in 1814. Belfield House, fully completed in 1786 is in the palladian style, and is in private hands today.

Buxton lost his Parliamentary seat in the 1837 election and retired from politics. In 1840 he was made “Baronet Buxton of Belfield in the County of Dorset and of Runton in the County of Norfolk“.

However, the years of hard work had taken its toll. He died at Norfolk in 1845 at the comparatively early age of 59.